Save
DNPB307
Add to cart Save
22SA-183-ranger-braveheart
Add to cart This is the rimmed version of the 9,3x62. Unlike most other cartridges that comes in both rimmed and rimless version, the designer chose to make a greater case capacity instead of reducing the load in order to keep the pressure down. Accordingly the 9,3x74R can be loaded to almost the same muzzle velocity as the 9,3x62 and still be used in combination guns and double rifles. It is not known who designed the 9,3x74R, but it emerged early in the 1900s as a German equivalent to the slightly shorter .400/.360 Westley Richards. The 9,3x74R is considered the Queen of rimmed cartridges, being equally powerful as the now almost obsolete .375 H&H Flanged Magnum. It is very popular in Europe for double rifles and also a good many combination guns have a rifle barrel in 9,3x74R. In England many old doubles in the .350-caliber range has been rebarreled for this cartridge. It covers the same range of game as the 9,3x62, but due to the construction of the rifles it is used in, it is not very useful at long range. 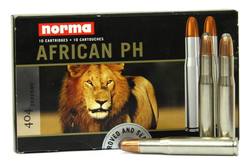